The collaborative project between DAEL, Westland Infra and KPN for the conversion of landlord to own connections and replacement of old kWh meters for new 'smart' measuring equipment is currently terminated. A great opportunity to gain insight into this project.

This roll-out of energy connections began late December 2014, and by the end of the project more than 4000 power connections were realized. How this works: Using SMS service to a network operation center (NOC), monitors can log in and unsubscribe from locations with antenna settings. Once the NOC received a text message from a mechanic on a specific site, it was known that the power had to be temporarily disabled. This way of working proved very effective in the passage of multiple locations a day. When some of KPN's people joined the DAEL mechanics at several times, they immediately noticed something remarkable. Often, the mechanics could hear the click of when the power boot started and decide whether the connection would be good or bad. In this last case, the NOC could be called immediately to help with the problems.

Image: Meterchanger Rob is busy with one of KPN's smart meters

During this project, DAEL was also responsible for the planning of the work in the areas concerned. You can see the network as a kind of circular blanket throughout the Netherlands. When two adjacent areas go out, the phone connection drops for a complete area. To prevent this, we made sure that there were never two mechanisms working in the same area. After about 4-5 months almost all the energy connections of the KPN mobile network were switched.

At KPN it appeared that DAEL works with all mobile providers and therefore has the necessary insight into the different networks. The characteristics of DAEL (flexibility, mutual trust and willingness to take this extra step) were KPN's and Westland Infra's decision to award the project to DAEL. The same project has also been completed in collaboration with KPN Fixed. This KPN, Westland Infra and DAEL combination succesfully upgraded the KPN mobile and fixed network for future use. 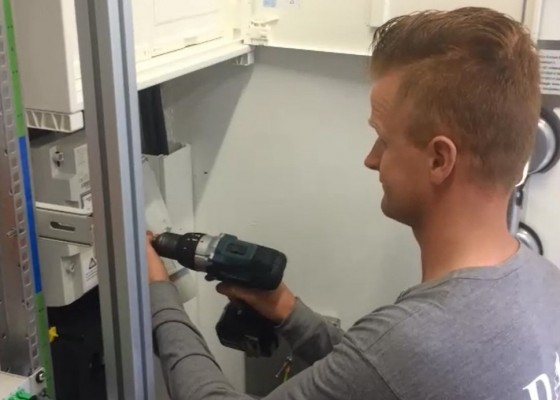