EDE - Imagine a world where wireless infrastructure is no longer confined to the ground by the limits of gravity. Huawei and KPN believe to make this possible by introducing the world’s first Connected Drone Taxi to the public. DAEL Telecom has recently helped to assemble this innovative machine at the KPN event in Ede.

Most drones are small and carry nothing except cameras. But Ehang Corp, a major Chinese drone maker, has been busy testing its Ehang 216 flying taxis, a drone designed to transport people. This drone is made mostly of carbon fibre materials and works on a lithium battery with a flight time of 23 minutes. The drone has already carried out a thousand manned test flights in China.

By taking network coverage to the low airspace (within the 300-meter range), the digital airspace in cities will soon undergo a transformation, as intelligent data traffic management in the air becomes a reality. Partners Huawei and KPN are on track to make the idea of flying taxis into a reality. This single passenger drone - owned by Huawei - is still flying with the help of KPN’s 4G network, but if there is a lot more flying in the future you will need the speed and low latency of 5G to keep it safe and reliable. With the expected release of 5G, connected drones will evolve into intelligent applications, enabling new capabilities such as intelligent logistics, intelligent security and intelligent transport in space, and open the digital world to the skies.

After all, it is not a strange idea that drones can eventually reduce nuisance in cities. It is also very conceivable that such a drone is used as an ambulance or to deliver packages. And it could be a matter of time for it to become a normal mode of transport. 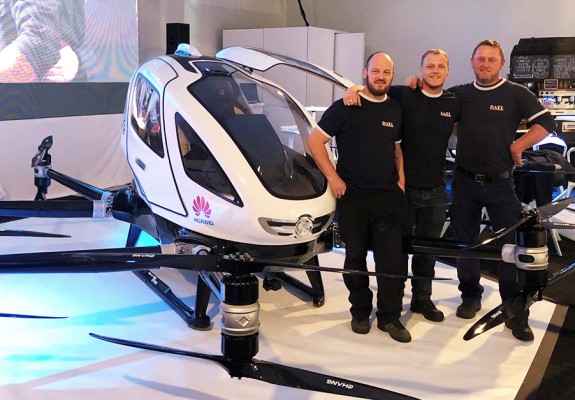