DAEL Rail and the Hoekse Lijn project: Everything you need to know

MAASDIJK – The Hoekse Lijn project is a much-discussed subject within the western metropolitan area. Where MRDH’s investment was first publicly applauded, this has now been a source of great annoyance among travellers who are now forced to use alternative transport. Setbacks with the software and soil on site caused a delay in the conversion. Yet, it is a project where our colleagues have been working hard for months now. This article contains everything to catch you up on the latest news and planning of this special project.

Project Hoekse Lijn
The Schiedam–Hoek van Holland railway is a former railway line and future rapid transit line of the Rotterdam Metro between Schiedam and Hoek van Holland along the Nieuwe Maas, in the west of the Netherlands. The line is also an important freight railway. During project Hoekse Lijn, the existing route between Hoek van Holland and Schiedam will be converted from a railway line to a metro line; a 'bimodal light rail and freight traffic system' in technical terms. This conversion is an investment by Metropolitan Region Rotterdam-The Hague and will extend the commuter service in the western metropolitan area of the Netherlands.

DAEL Rail as a subcontractor
DAEL Rail has been working on the project since March 2017. We do this as a subcontractor for construction company Van Gelder Rail, which in turn works as a subcontractor for the Canadian company Bombardier. During the project, DAEL Rail is under the supervision of Van Gelder; a collaboration that has been going very well since the beginning in March 2017. In November last year, Van Gelder’s project team even moved from their previous base in Vlaardingen to our own office in Maasdijk. It is expected that they will be working in our building until autumn this year.

The activities of DAEL Rail mainly include the installation, assembly and testing of track safety elements in and along the railway. This includes elements such as; BVI rooms, light signals, train detection, key boxes, signs, points, bridge protection, traction voltage monitoring, minus cabinets, level crossing- and overpath systems all connected via cabling.

Planning
The major construction period of the seven stations, the installation of the BVI rooms and the connection of the train security installation and objects started in March 2017 and would initially be completed in September 2017. Due to setbacks in the conversion (cables and pipelines in unexpected places and a soil that turned out to be polluted), the Hoekse Lijn is now expected to be completed in the autumn of this year. In the final phase of this project, DAEL Rail will enter the test phase to test all connections in the train protection system.

July 2017: Construction phase
Building the minus cabinets; power connection from the railway to the substation.

November 2017: Connecting TDS
Work on train detection system; Cabling of the sensors to the track.

Present until autumn 2018; Testing phase
Perform various tests in the BVI rooms and rail safety elements in and along the railway.

Any questions or comments in response to this message? Please feel free to contact rail@dael.com for more information 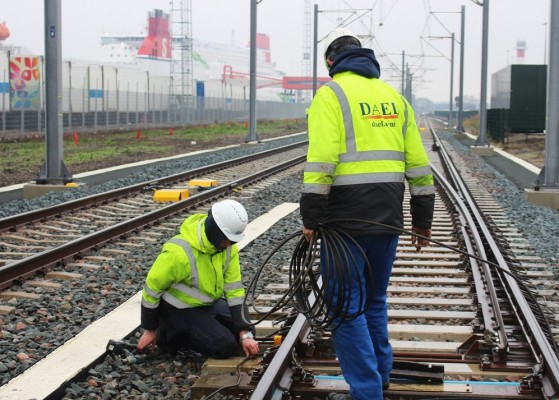